Sermon by the Rev. Dr. James A. Gibson III

“I am the good shepherd. I know my own and my own know me, just as the Father knows me and I know the Father; and I lay down my life for the sheep.”

Collect of the Day

O God, whose Son Jesus Christ is the Good Shepherd of your people: Grant that, when we hear his voice, we may know him who calls us each by name, and follow where he leads; who, with you and the Holy Spirit, lives and reigns, one God, for ever and ever. Amen.

Three weeks after Easter Sunday and we’re still talking about him. Of course, this is his church, so we never stop talking about Jesus. After all, if it weren’t for him, we wouldn’t be here.

This Sunday, in particular, we talk about him as “the good shepherd.” Every year, on the fourth Sunday of Easter, we observe what has come to be known as “Good Shepherd Sunday.”

The Good Shepherd is a comfortable, familiar image of Jesus, even for those who live in areas where shepherding is not a common occupation.

A sermon on Jesus the Good Shepherd might not be such a challenge except for one unavoidable factor. In our liturgical tradition, we don’t get to pick the biblical texts from which we preach. They are chosen for us, appointed texts for each Sunday of the year, systematically laid out for us in a three-year cycle in the lectionary. For this particular Sunday, over that three-year period, Jesus’s discourse on the Good Shepherd in John 10 is broken up into three different parts, seemingly with three different emphases if each one is taken in isolation.

It might appear, at first glance, that the emphasis for this year would be church unity, “one flock, one shepherd,” but that would be anachronistic. We have to consider the wider context if we want to understand what Jesus means by this and everything else he is saying and to whom he is saying it.

But these words are a double-edged sword when we consider to whom they were originally spoken. To get the big picture, you have to go back to chapter 9. There, John provides a rather lengthy account of Jesus healing a man born blind, the man being subsequently reviled and persecuted by the Pharisees, and Jesus declaring, “For judgment I came into this world, that those who do not see may see, and those who see may become blind.”

To which the Pharisees respond, “Are we also blind?”

Jesus replies, “If you were blind, you would have no guilt; but now that you say, ‘We see,’ your guilt remains.”

That is how chapter 9 ends. Chapter 10 begins with Jesus still speaking, “Truly, truly, I say to you, he who does not enter the sheepfold by the door but climbs in by another way, that man is a thief and a robber. But he who enters by the door is the shepherd of the sheep.”

The “you” to whom he is speaking is the very same “you” who asked him, “Are we also blind?”

This entire discourse is directed to the Pharisees—and they take no comfort from Jesus’s words, especially when he presents himself as “the good shepherd” in contrast to how he characterizes them.

To the Pharisees who, behaving quite unlike shepherds, had been persecuting those, like the man born blind, whom they should have been protecting as members of their flock, Jesus says, “You are a bunch of hired hands. You don’t care for the sheep. You not only abandon them to the wolf. You even go so far as to throw them to the wolf.” 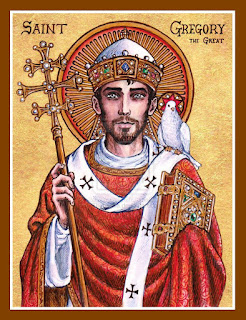 Gregory the Great describes these pious phonies very well. “There are some who love earthly possessions more than the sheep and do not deserve the name of a shepherd,” he writes. “He is called a hireling and not a shepherd because he does not pasture the Lord’s sheep out of his deep love for them but for a temporal reward. That person is a hireling who holds the place of a shepherd but does not seek to profit souls. He is eager for earthly advantages, rejoices in the honor of preferment, feeds on temporal gain and enjoys the deference offered him by other people.”

How many times does Jesus say as much about the Pharisees? Again, they are his primary audience here. To us, his words bring comfort. To them, they brought judgment.

“I am the good shepherd. I know my own and my own know me, just as the Father knows me and I know the Father; and I lay down my life for the sheep. And I have other sheep that are not of this fold. I must bring them also, and they will listen to my voice. So there will be one flock, one shepherd.”

Not only will I protect my own from the wolf, Jesus says. I will throw myself to the wolf and give my life that the sheep may live—and not only these sheep that you now see, but others, as well. Lost sheep waiting to be found, longing to be welcomed home into the one flock under the one shepherd.

These words are all the more powerful when you realize Jesus speaks them to the very people who will demand he be put to death, proving all the more that they are false shepherds, blind guides, hypocrites, and hirelings who care not for the sheep, but for their own self- preservation.

To these, his enemies, the good shepherd will surrender himself for the sake of his beloved sheep.

“For the sake of his flock,” writes Basil of Seleucia, “the shepherd was sacrificed as though he were a sheep. He did not refuse death. He did not destroy his executioners as he had the power to do, for his passion was not forced on him. He laid down his life for his sheep of his own free will. ‘I have the power to lay it down,’ he said, ‘and I have the power to take it up again.’ By his passion he made atonement for our evil passions, by his death he cured our death, by his tomb he robbed the tomb, by the nails that pierced his flesh he destroyed the foundations of hell.”

The Lord is risen, indeed! Alleluia!

Posted by James Gibson on April 25, 2021
Email ThisBlogThis!Share to TwitterShare to FacebookShare to Pinterest
Labels: Sermons