Sermon by the Rev. Dr. James A. Gibson III

Collect of the Day

Almighty God, who through you only-begotten Son Jesus Christ overcame death and opened to us the gate of everlasting life: Grant that we, who celebrate with joy the day of our Lord's resurrection, may, by your life-giving Spirit, be delivered from sin and raised from death; through Jesus Christ our Lord, who lives and reigns with you and the Holy Spirit, one God, now and for ever. Amen.

“Salvation is the great theme of Scripture,” writes the Reformed pastor Kevin DeYoung. “If we can plot the biblical storyline as creation, fall, redemption, and consummation, then clearly it is that third act which dominates the pages of special revelation. Strictly speaking, the Bible details creation in two chapters (Genesis 1-2), the fall in one chapter (Genesis 3), and consummation in two chapters (Revelation 21-22). The other 1,184 chapters are about redemption.”

If that much of the Bible is devoted to that one theme, it should be beyond comprehension that so many, during various periods of history (and we must include the present among them) have read the Bible cover to cover and have somehow missed it. Ironically, the ones who have missed it seem to be the most prolific during the week leading up to Easter—the very time in which we are supposed to remember and recall the ordeal of the Passion, all the agony and sorrow our Lord endured in order to redeem us. In one article published this week, it was suggested that Jesus had doubts, even sinful doubts, about who he was and what he was to accomplish.* In another, the death and resurrection of Christ came in a distant second to the author’s favorite ideological agenda.

Kevin DeYoung’s article was the exception to the rule this week. So many others were just horrendous exercises in missing the point.

“There is a reason that all four Gospels culminate with the death and resurrection of Jesus,” DeYoung writes. “No other biography spends a third of its time detailing the subject’s last week. But the Gospels are not ordinary biographies. They tell the story of victory in defeat, of triumph through tragedy. Make no mistake: the point of Jesus’s life was to die, the point of his death was to rise again, and the point of his resurrection was to justify believing sinners (Rom. 4:25). Upon seeing Jesus, John the Baptist announced, ‘Behold the Lamb of God, who takes away the sin of the world!’ (John 1:29). From even before his birth, the mission of the Christ was to save sinners. ‘You shall call his name Jesus,’ the angel told Joseph, ‘for he will save his people from their sins’ (Matt. 1:21). No wonder Jesus understood his own mission as coming ‘to seek and save the lost’ (Luke 19:10). ‘The Son of Man did not come to be served,’ he told his disciples, ‘but to serve and to give his life as a ransom for many.’ (Mark 10:45).”

To the household of Cornelius, Peter, in our reading from Acts this morning, said, “To him [Jesus] all the prophets bear witness that everyone who believes in him receives forgiveness of sins through his name.”

It was true then. It is true now. It has always been the truth that turns sorrow to joy, despair to hope, and death to everlasting life. 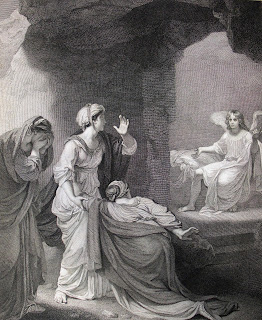 “Do not be alarmed,” says the young man to the women who came to the tomb. “You seek Jesus of Nazareth, who was crucified.”

Crucified, dead, buried. Buried in this very tomb, the entrance sealed by a stone you thought could not be rolled away.

Are you seeking Jesus? Well, ladies, you’ve come to the wrong place.

You are seeking him over whom death has no claim!

“He has risen; he is not here. See the place where they laid him.”

See with your own eyes that death could not hold him. The grave could not keep him. Hell could not defeat him.

“But,” don’t waste too much time here, “go, tell his disciples and Peter,” yes even Peter, that coward that denied him three times, because he still has work for him with Cornelius and a whole bunch of other people, “that he is going before you to Galilee. There you will see him, just as he told you.”

With all the sorrow and agony of the last few days, maybe you forgot that little detail—but he did tell you, no less than three times, that he would die and, after three days, he would rise again.

“See the place where they laid him.”

You can see he is not here. He is on his way to Galilee. You will see him there. I know you are afraid now, but again, “Do not be alarmed.”

Go, tell his disciples. Go, tell the world. Go, announce the good news that, for every sinner, there is salvation in the name of him who died and rose again.

“We will not be Bible people,” DeYoung concludes, “or Jesus people, or gospel people—if we are not salvation-for-sinners people. Though some may call it a soterian gospel or an individualistic gospel, the unavoidable reality of Scripture is that at the heart of the message of the cross is the simple, wonderful, glorious good news that Christ saves sinners like you and me. And if this message, and all that took place to accomplish what it announces, represents the climax of redemptive history—indeed, if all of history is about redemption—then we are right to conclude that this soteriological emphasis must shape the sound of our preaching, the priority of our ministry, and the mission of the church. . . . The mercy of God is the theme of our song because the salvation of sinners is the story of Scripture. Let us sing it, say it, and savor it—this week and for eternity.”

Thanks be to God.

*Denny Burke has written a helpful response to the article in question.

Posted by James Gibson on April 04, 2021
Email ThisBlogThis!Share to TwitterShare to FacebookShare to Pinterest