While the church in Pergamum has a few problems which need to be addressed, not least of which being the presence of the Nicolaitans, an obscure but dangerous heretical sect, Jesus has nothing but commendation to offer the church in Smyrna. Bearing faithful witness to Christ, however, is a dangerous thing in Smyrna. Jesus warns the believers that a time of testing is coming upon them. Some will be thrown into prison; some may even lose their lives. "Be faithful unto death," Jesus encourages them, and I will give you the crown of life."

The bishop of Smyrna, Polycarp, was ordained by John himself. The account of his martyrdom is one of the most moving stories of faith in the history of the ancient church. Polycarp would not deny his Lord, even if it meant making the ultimate sacrifice. He remains an example for all believers of patient endurance and faithfulness even unto death.

9:1
But as Polycarp entered into the stadium, a voice came to him from heaven; "Be strong, Polycarp, and play the man." And no one saw the speaker, but those of our people who were present heard the voice. And at length, when he was brought up, there was a great tumult, for they heard that Polycarp had been apprehended. 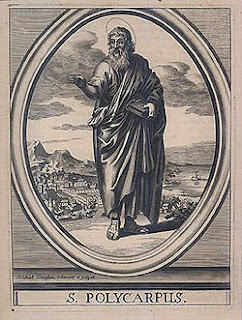 9:2
When then he was brought before him, the proconsul asked whether he were the man. And on his confessing that he was, he tried to persuade him to a denial saying, "Have respect to your age," and other things in accordance therewith, as it is their habit to say, "Swear by the genius of Caesar; repent and say, 'Away with the atheists.'" Then Polycarp with solemn countenance looked upon the whole multitude of lawless heathen that were in the stadium, and waved his hand to them; and groaning and looking up to heaven he said, "Away with the atheists."

9:3
But when the magistrate pressed him hard and said, "Swear the oath, and I will release you; revile the Christ," Polycarp said, "Eighty-six years have I been His servant, and He has done me no wrong. How then can I blaspheme my King who saved me?"

10:2
The proconsul said, "Prevail upon the people." But Polycarp said, "As for yourself, I should have held you worthy of discourse; for we have been taught to render, as is proper, to princes and authorities appointed by God such honor as does us no harm; but as for these, I do not hold them worthy, that I should defend myself before them."

11:1
Whereupon the proconsul said: "I have wild beasts here and I will throw you to them, except you repent." But he said, "Call for them, for the repentance from better to worse is a change not permitted to us; but it is a noble thing to change from that which is improper to righteousness."

11:2
Then he said to him again, "If you despise the wild beasts, I will cause you to be consumed by fire, unless you repent." But Polycarp said: "You threaten that fire which burns for a season and after a little while is quenched: for you are ignorant of the fire of the future judgment and eternal punishment, which is reserved for the ungodly. But why do you delay? Come, do what you will."

12:1
Saying these things and more besides, he was inspired with courage and joy, and his countenance was filled with grace, so that not only did it not drop in dismay at the things which were said to him, but on the contrary the proconsul was astounded and sent his own herald to proclaim three times in the midst of the stadium, "Polycarp has confessed himself to be a Christian."

12:2
When this was proclaimed by the herald, the whole multitude both of Gentiles and of Jews who dwelt in Smyrna cried out with ungovernable wrath and with a loud shout, "This is the teacher of Asia, the father of the Christians, the puller down of our gods, who teaches multitudes not to sacrifice nor worship." Saying these things, they shouted aloud and asked the Asiarch Philip to let a lion loose upon Polycarp. But he said that it was not lawful for him, since he had brought the sports to a close.

12:3
Then they thought fit to shout out with one accord that Polycarp should be burned alive. For it must needs be that the matter of the vision should be fulfilled, which was shown him concerning his pillow, when he saw it on fire while praying, and turning round he said prophetically to the faithful who were with him, "I must needs be burned alive."

13:1
These things then happened with so great speed, quicker than words could tell, the crowds immediately collected timber and sticks from the workshops and baths, and the Jews more especially assisted in this with zeal, as is their custom.

13:2
But when the pile was made ready, divesting himself of all his upper garments and loosing his belt, he endeavored also to take off his shoes, though not in the habit of doing this before, because all the faithful at all times vied eagerly who should soonest touch his flesh. For he had been treated with all honor for his holy life even before his gray hairs came.

13:3
Immediately then the instruments that were prepared for the pile were placed about him. As they were going likewise to nail him to the stake, he said: "Leave me as I am; for He that has granted me to endure the fire will grant me also to remain at the pyre unmoved, even without the security which you seek from the nails."

14:1
So they did not nail him, but tied him. Then he, placing his hands behind him and being bound to the stake, like a noble ram out of a great flock for an offering, a burnt sacrifice made ready and acceptable to God, looking up to heaven said: "O Lord God Almighty, the Father of Your beloved and blessed Son Jesus Christ, through whom we have received the knowledge of You, the God of angels and powers and of all creation and of the whole race of the righteous, who live in Your presence;

14:2
I bless You because You have granted me this day and hour, that I might receive a portion amongst the number of martyrs in the cup of Your Christ unto resurrection of eternal life, both of soul and of body, in the incorruptibility of the Holy Spirit. May I be received among these in Your presence this day, as a rich and acceptable sacrifice, as You did prepare and reveal it beforehand, and have accomplished it, You that art the faithful and true God.

14:3
For this cause, yea and for all things, I praise You, I bless You, I glorify You, through the eternal and heavenly High-priest, Jesus Christ, Your beloved Son, through Whom, with Him and the Holy Spirit, be glory both now and ever and for the ages to come. Amen."

15:1
When he had offered up the Amen and finished his prayer, the firemen lighted the fire. And, a mighty flame flashing forth, we to whom it was given to see, saw a marvel, yea and we were preserved that we might relate to the rest what happened.

15:2
The fire, making the appearance of a vault, like the sail of a vessel filled by the wind, made a wall round about the body of the martyr; and it was there in the midst, not like flesh burning, but like a loaf in the oven or like gold and silver refined in a furnace. For we perceived such a fragrant smell, as if it were the wafted odor of frankincense or some other precious spice.

16:1
So at length the lawless men, seeing that his body could not be consumed by the fire, ordered an executioner to go up to him and stab him with a dagger. And when he had done this, there came forth [a dove and] a quantity of blood, so that it extinguished the fire; and all the multitude marveled that there should be so great a difference between the unbelievers and the elect.

16:2
In the number of these latter was this man, the glorious martyr Polycarp, who was found an apostolic and prophetic teacher in our own time, a bishop of the holy Church which is in Smyrna. For every word which he uttered from his mouth was accomplished and will be accomplished.