The church that had fallen asleep (Revelation 3:1-6)

A church cannot live long off of its "reputation." The church in Sardis presented itself as a church that was "alive." Jesus, however, was not impressed. "You have a reputation of being alive," he says, "but you are dead. Wake up, and strengthen what remains and is about to die, for I have not found your works complete in the sight of my God." The Sardis church stands in contrast to the church in Smyrna. Smyrna was a church thriving in spite of persecution; Sardis was a church dying because it thought it was safe from trouble. 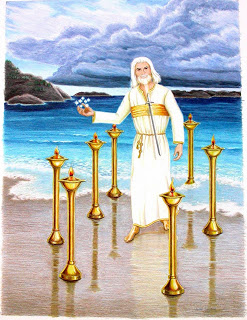 The language of Jesus' admonition was one the believers in Sardis would have understood all too well if they knew their history. Twice, in 549 B.C. and 218 B.C., the city had been sacked. Both times, the citadel of the city had been taken by stealth. The people were caught unaware, thinking the natural fortifications of the city were sufficient to fend off any attack. Jesus warned the believers in Sardis that if they "will not wake up, I will come like a thief, and you will not know at what hour I will come against you." Just as the city had fallen into enemy hands because of a lack of watchfulness, so the church in that city would come under judgment if it did not awaken from its sleep.

It would appear the church in Sardis had become too much like its surroundings. Its "reputation" was becoming linked with that of the city itself and its ignominious history of failing to stay awake in the face of impending catastrophe. Having likewise fallen asleep, the believers in Sardis were admonished to wake up and face reality. They were no longer "alive," but "dead." Their idleness and apathy were sins for which they must repent. All was not yet lost, indeed, there were "still a few names in Sardis" who were "worthy," but the urgency of Jesus' warning indicated the time was short. His judgment would come at a time when they least expected it; and it would be swift, sure, and decisive.

Watchfulness is the theme that runs throughout the Advent season. Unlike the church in Sardis, we do not want to be found sleeping at our Lord's coming. Jesus promises that "[the] one who conquers will be clothed thus in white garments, and I will never blot his name out of the book of life. I will confess his name before my Father and before his angels." That is a promise worth waiting for!

"He who has an ear, let him hear what the  Spirit says to the churches."
Posted by James Gibson on December 10, 2020
Email ThisBlogThis!Share to TwitterShare to FacebookShare to Pinterest
Labels: Advent, Daily Office