Bearing witness to the end of all things

John the Baptist came preaching an urgent message of repentance, but the religious elites ignored and even scoffed at him. Jesus rebuked them for their arrogance, saying tax collectors and prostitutes would enter the kingdom of heaven before them. Writing some years later, the Apostle Peter (cf. 2 Peter 3:1-10) addressed another group of scoffers who were discouraging believers by mocking the idea that the present world was passing away. "They will say, 'Where is the promise of his coming? For ever since the fathers fell asleep, all things are continuing as they were from the beginning of creation.'"

The Apostle's use of the images of water and fire echo the words of John, "I baptize you with water for repentance, but he who is coming after me is mightier than I, whose sandals I am not worthy to carry. He will baptize you with the Holy Spirit and with fire" (Matthew 3:11). The message is the same, but on a different level. As baptism with water washes away the outward effects of sin, so baptism with the Holy Spirit and with fire purges the inward cause of sin. John addresses this on the personal, individual level in calling sinners to repentance. Peter carries it forward to its logical, cosmic conclusion. As God once acted through the waters of the flood to wash away the outward uncleanness of "the world that then existed," so he will act again through fire to purge "the heavens and earth that now exist" of all that causes them to be out of sync with his will and purpose.

Water calls to mind comfort and refreshment, but an outward cleansing is not sufficient for this corrupt and sinful world. Fire, especially as Peter describes it, is a most unpleasant image, but God must act in a powerful and decisive way to get to the root cause of the world's fallenness. 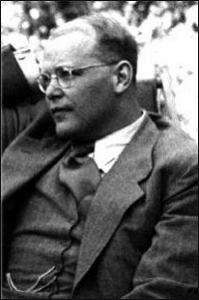 "The Church of Jesus Christ bears witness to the end of all things," writes Dietrich Bonhoeffer in the introduction to his lectures on Creation and Fall. Thus, the church's whole perspective, its whole identity, message, and mission are shaped by "the end." Undoubtedly, it was such a perspective which enabled Bonhoeffer to stand boldly against the Nazi regime, even thought it cost him his life. But his words still ring true today, more than seventy years later.

The church proclaims Christ, who is "the new" and "the end of the old." The old, fallen world does not want to be told that its end has come and a new order of things is coming into being. But that is precisely the message the church proclaims to the old world.

"'The old world cannot take pleasure in the Church," Bonhoeffer says, "because the Church speaks of its end as though it had already happened--as though the world had already been judged. The old world does not like being regarded as dead." The church has always had to contend with those "who come to it who think the thoughts of the old world." That is nothing unusual, for no one can claim to be completely free of such thoughts from time to time. But what sets the church "in tumult," Bonhoeffer says, is "when these children of the world that has passed away lay claim to the Church, to the new, for themselves. They want the new and only know the old. And thus they deny Christ the Lord."

If the church were to capitulate to the demands of "the children of the world that has passed away" it would deny Christ and thus cease to be the church. But following Christ means more than simply turning them away. The church "recognizes the old world only in light of the new," says Bonhoeffer, "because the Church is more certain of the new world than of anything else."

From the perspective of "the end," the church sees "the children of the world that has passed away" in a new light: as lost souls caught in the death throes of the "old world," desperately seeking to fill the void in their lives, but hopelessly enslaved by demonic forces which have shaded their eyes from the beauty of the "new world" that is breaking forth around them. Following Christ means giving hope to these hopeless creatures. Following Christ means leading them out of the darkness of the world that has passed away and into the light of God's glorious new world.