In preparing them for his ordeal of suffering and death, Jesus told his disciples they would "all fall away" in fulfillment of the prophecy, "I will strike the shepherd, and the sheep will be scattered" (Mark 14:27). There is an element of common sense here which is often overlooked. In Greek, the words for "apostasy" and "resurrection" are antonyms. There is the sense that one must "fall away" before one can "stand up again." In other words, the familiar teaching in Christian eschatology that there must first be a "falling away" before the consummation of all things, that is, before the resurrection, is rooted in this very basic premise. 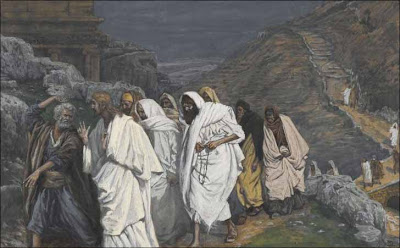 Jesus cast the ordeal of his suffering, death, and resurrection against the grand backdrop of God's plan for the redemption of his creation. In the midst of his ordeal, his disciples would "fall away." The intensity of the conflict would be such that they would abandon the faith and look instead toward self-preservation. Peter would embody this "falling away" with his three denials "before the rooster crows twice" (Mark 14:30).

In order to appreciate fully what Jesus accomplished in rising from the dead, it is first necessary to realize how far we human beings have fallen from our original state of righteousness. We are children of Adam and Eve and, therefore, heirs of the great apostasy by which we lost our standing in right relationship with God. Only the cross can atone for our sin. Only the resurrection can restore our standing with God.
Posted by James Gibson on August 16, 2020
Email ThisBlogThis!Share to TwitterShare to FacebookShare to Pinterest
Labels: Biblical Studies, Eschatology, Theology