Irony is a common device employed throughout the biblical narrative. With the account of Cain and Abel (Genesis 4:1-16), we see it employed from the very earliest beginnings. Here are two brothers, sons of Adam and Eve. Of Cain, her firstborn, Eve says, “I have gotten a man with the help of the LORD.” From a post-Eden, that is, fallen, perspective, Cain certainly appears to be the more “manly” of the two siblings. He is “a worker of the ground.” Abel, conversely, follows the more soft-spoken and gentle path of “a keeper of sheep.”

Yet, a careful reading of all that has come before clues us in on the impending calamity. The ground that Cain works is cursed because of Adam’s sin (Genesis 3:17). By working it, Cain is merely living out the implications and consequences of that curse. Abel, on the other hand, tends the sheep from whose “skin” came the “garments” which covered his parents’ shameful nakedness. Cain cultivates life under the curse; Abel seeks redemption from the curse. 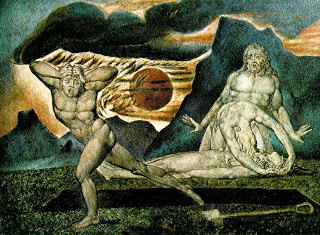 It is apparent that Cain’s animosity toward Abel is festering long before the two make their respective offerings to God. Cain offers some of the fruit of the cursed ground that he has worked. Abel offers one of the firstborn of his flock. It is not God’s preference for animal carcasses over fruit that causes him to accept Abel’s offering and reject Cain’s. Rather, it is his requirement that every offering come from a pure heart. Cain’s offering of fruit from the cursed ground is indicative of a heart out of sync with the heart of God. He seeks not redemption from his fallen state but, rather, approval of his fallenness. He desires not to be conformed to God’s image, but to conform God to his image.

Abel, however, makes an offering from a heart fully devoted to God. His offering requires him to make a painful sacrifice. He must choose a spotless lamb, even before it is born, and raise it to maturity for the sole purpose of slaughtering it and presenting it to God as a burnt offering. Abel makes such an offering not because he was born with a pure heart, but because he realizes precisely the opposite is true. No less than his treacherous brother, Abel was born in sin. He realizes that redemption out of his fallen state requires sacrifice on his part, even the shedding of blood. Abel’s offering of the firstborn of his flock prefigures God’s own offering of Christ, the perfect Lamb, for the sins of the world.

Cain’s reaction to God’s rejection of his offering is all too typical of a fallen creature. He becomes angry and bitter. To be blunt, he whines and complains. How could God treat him so unfairly? But God sternly warns him that he is treading on dangerous ground. “Why are you angry, and why has your face fallen?” God asks him. “If you do well, will you not be accepted? And if you do not do well, sin is crouching at the door. Its desire is for you, but you must rule over it.”

Significant here is the structure of God’s warning to Cain. It harkens back again to the curse placed on Adam and Eve. But it was to Eve, not to Adam, that God spoke in a similar manner, saying, “Your desire shall be for your husband, and he shall rule over you” (Genesis 3:16). Thus Cain, the “worker of the ground,” finds himself seduced by a most dangerous mistress. What God is saying to him is, in essence, “Be a man, you little whiner! Turn away from sin and give your life back to me!”

Tragically, however, Cain does not heed God’s warning. He continues to cultivate his fallenness, allowing his bitterness and resentment to continue to fester. Contrary to Eve’s expectation, Cain is not a man. Refusing God’s gracious offer of redemption, he becomes the world’s first sissy. His enmity toward God manifests itself in enmity toward his brother; his enmity toward his brother results in murder; and murder results in his being sent away into the land of Nod, to wander aimlessly for his remaining years, in constant fear for his life.