Faith and Honor Podcast: The Ascension

Beige. Every wall of the sanctuary was beige; a deafening vagueness from ceiling to floor.    Though I didn't grow up in an Evangelical mega church like many other millennials, the sanctuary of my small Episcopal Church had the same characterless essence - that of a nondescript multipurpose room, enveloped in the color of nothingness. Yet, I did not fully realize the deprivation of aesthetic sanctity which myself and other millennials experienced growing up in many American churches until I visited the Holy Land in October of 2019. The Language of Color   God communicates with us through the symbolism of colors. For example, God’s chosen people (Israel) have been signified by the color blue since the time of David. After the flood, God used a rainbow to symbolize his covenant with the world (Genesis 9). The new covenant is symbolized by Christ’s crimson blood (Matthew 26:28). God uses green to symbolize eternal life each spring (Psalm 1:3). Our sins are likened to scarlet, 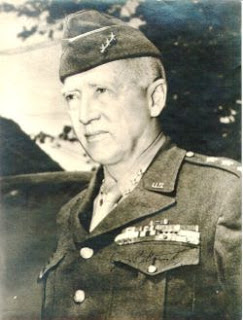 One of the most memorable scenes in the movie Patton (a film chock full of memorable scenes) has the famous World War II general, frustrated over the negative effects of inclement weather on the movement of his troops, ordering his chaplain to compose a "weather prayer." The chaplain responds rather incredulously, telling General Patton that it would take "an awfully heavy rug . . . praying for good weather so we can kill our fellow man." Nevertheless, he dutifully composes a prayer. The weather subsides, the army advances, and Patton has the chaplain decorated for meritorious service. Twenty years before that 1970 Hollywood embellishment, Monsignor James H. O'Neill, Chief Chaplain of the Third Army under Patton, had set the record straight in an official government document written in response to the mythology which was already growing up around "General George S. Patton and the Third Army Prayer." It was not until 1971 that the paper received widesp

Theological revisionists have, over the years, perfected a way of broaching the issue of homosexuality (and other forms of sexual brokenness that make up an ever expanding alphabet soup of virtuous vices) that is long on emotion and short on substance. Veterans of the ecclesiastical wars that have been fought over the last half century are hardly impressed, much less persuaded, by the now worn out refrain that this is a “very painful and complicated issue.” The rising generation of clergy in the Anglican Church in North America (ACNA), however, have lately shown themselves to be disturbingly susceptible to the siren call to be more “winsome” when engaging the revisionists who continue to beat the drum of “very painful and complicated.” A word of caution, therefore, is warranted to our young colleagues about the dangers of too soon abandoning the field of battle when the real conflict has barely even begun. The real issue at stake, both now and in the stormy decades preceding, has n