Beige. Every wall of the sanctuary was beige; a deafening vagueness from ceiling to floor.

Though I didn't grow up in an Evangelical mega church like many other millennials, the sanctuary of my small Episcopal Church had the same characterless essence - that of a nondescript multipurpose room, enveloped in the color of nothingness.

Yet, I did not fully realize the deprivation of aesthetic sanctity which myself and other millennials experienced growing up in many American churches until I visited the Holy Land in October of 2019.

The Language of Color

God communicates with us through the symbolism of colors. For example, God’s chosen people (Israel) have been signified by the color blue since the time of David. After the flood, God used a rainbow to symbolize his covenant with the world (Genesis 9). The new covenant is symbolized by Christ’s crimson blood (Matthew 26:28). God uses green to symbolize eternal life each spring (Psalm 1:3). Our sins are likened to scarlet, but through Christ our sins become “as white as snow” (Isaiah 1:18).

The great painters of the Renaissance period recognized the power of color in symbolic, nonverbal communication. In fact, if you take a moment to imagine the Virgin Mary, chances are that you will imagine her cloaked in blue. For this vivid, lasting imagery of Mary adorned in blue, we can thank Agnolo Gaddi (1350-1396), Masaccio (1401-1428), and Giovanni Bellini (1425-1516). These and other Renaissance painters achieved the classic, ultramarine pigmentation of Mary’s veil using a metamorphic rock called lapis lazuli. 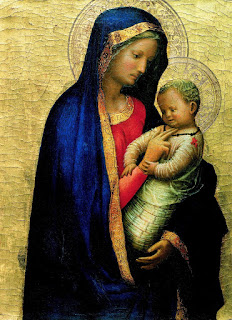 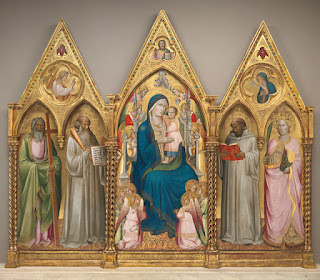 Madonna Enthroned with Saints and Angels
By Agnolo Gaddi
Source 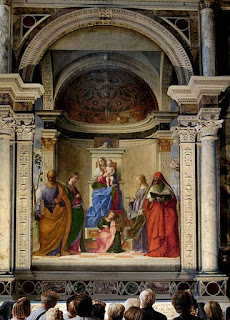 Wassily Kandinsky, a Russian painter and Orthodox Christian, wrote, “The power of profound meaning is found in blue… Blue is the typical heavenly colour.” In art and in scripture, blue is the color of holiness, purity, divinity, serenity, revelation, authority, kingship, and faithfulness; it is often used to symbolize Israel, the Holy Spirit, the priesthood, and the heavens, as well as the healing power of Christ. It is the Virgin Mary’s purity, faithfulness, and holiness which have earned her a cloak of brilliant blue.

Far and away, it was the bold, evocative presence of the color blue that most intimately touched my soul and invigorated my spirit as I toured the Holy Land. Two churches in Jerusalem, in particular, especially encapsulate the symbolic, unspoken communication within the ancient tradition of the Christian faith.

“And they saw the God of Israel. Under His feet was a work like a pavement made of sapphire, as clear as the sky itself.” (Exodus 24:10)

The Church of St. Peter in Gallicantu

Roosted upon a steep slope of Jerusalem’s Mount Zion is the Church of Saint Peter in Gallicantu; its name comes from the Latin word Gallicantu, meaning "cock's crow," in commemoration of Peter's triple rejection of Jesus (Mark 14:30). The site is also thought to be the location of Caiaphas’ palace. Beneath the church is a dungeon cavern, believed to be “the cell where Jesus was detained for the night following his arrest.” Visiting the site was both a somber and a deeply moving experience. 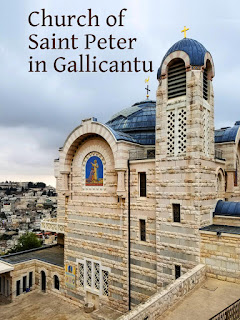 The importance and symbolism of the color blue became evident from the moment I arrived at the Church of St. Peter in Gallicantu. At the entrance to the church at two large, bronze doors adorned by biblical bas-relief; a scene depicting the moment at the Cenacle, following the Last Supper, when Christ predicted Peter’s triple denial. The halo-adorned Christ is clothed in blue, signifying His divinity and kingship. 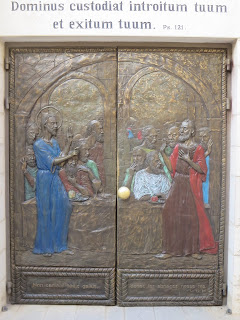 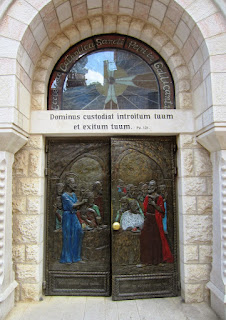 He is the Son of God. Caiaphas (on the right) tears up his clothes while saying, ‘He blasphemed,’“ (Matthew 26, 65-66). “In the sky, God hides his face to no longer face those who are condemning his Son,” and. four angels can be seen presenting to the cross to Christ. Loyal to the Father, Christ accepts His cross, symbolizing that “God had such love for the world that he gave his only Son," (John 3:16). 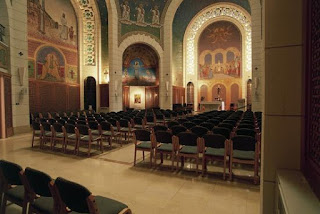 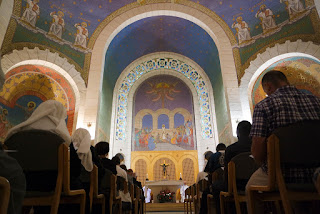 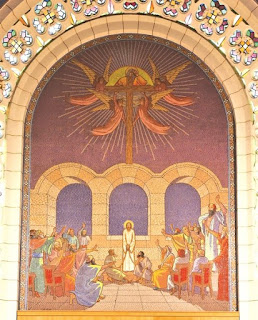 Situated at the peak of the church’s dome, nestled into a starry sky, is a mammoth, stained-glass cross. The cross directs visitors’ attention to the heavens: “From now on you will see the Son of Man sitting at the right hand of the Mighty One and coming on the clouds of heaven.” (Matthew, 26:64) 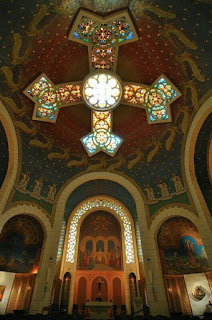 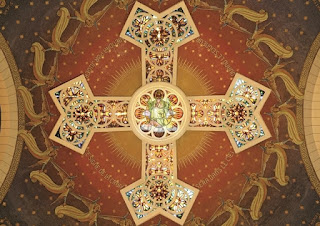 Located near the ancient cavern believed to be the cell where Jesus was imprisoned, stands a statue of Christ, the suffering servant. Upon His knees, the captive Christ - clothed in blue - is depicted looking upwards to heaven, praying for the sins of the world. Two nearby inscriptions demonstrate the significance of the statue.

“Because he surrendered himself to death and was counted among the wicked, while bearing the sins of many and interceding for transgressors.” (Isaiah 53:12)

“God highly exalted him and bestowed on him the name above every other name.” (Phil 2:9)

The Basilica of the Agony

Not far from the Church of St. Peter in Gallicantu is the Garden of Gethsemane, which sits nestled along the towering walls of the Basilica of the Agony. Located at the foot of the Mount of Olives and nick-named the “Church of All Nations,” construction of the basilica was funded by twelve different countries. Enshrined within the church is a section of stone in the Garden of Gethsemane which is believed to be where Jesus prayed on the night of his arrest (Matthew 26:36). 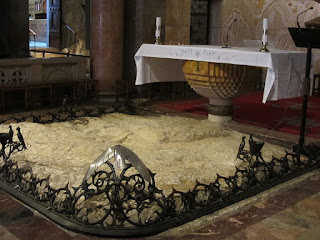 Among the churches which I visited while touring the Holy Land, the colorful, Byzantine-styled, neoclassical exterior of the “Church of Nations” was the most exquisite. Above the columned entrance is a breathtaking, many-colored mosaic depicting Christ as the link between God and humanity. 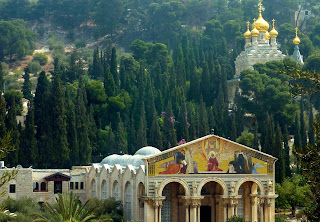 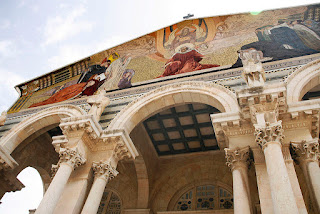 Upon entering the basilica, I felt as though I had passed from day into night. Partitioning the interior into three sections, lumber-like columns mimic the towering trees of a forest; the towering pillars stretch upwards into twelve cupolas fashioned in the likeness of the midnight sky. The deep blue ceiling, symbolizing the heavens and the nighttime sky, is punctuated by stars of inlaid gold. Reflecting the tone of Christ’s solitude that fateful night in the Garden of Gethsemane, the tinted alabaster windows of the basilica dim the bright light of the outside sun, creating a somber, subdued atmosphere. 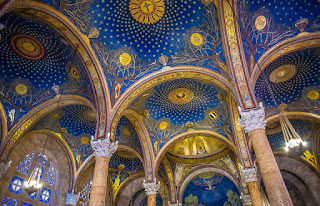 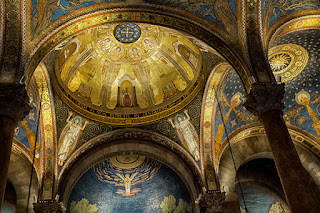 As I knelt down to touch the large stone believed to be the place at which Christ prayed alone in the garden, my mind wandered. What must He have been thinking? What must he have felt? Was He frightened? Ashamed of my own unworthiness, I fell to my knees and confessed my sins.

Meaning, the antidote to meaninglessness

What distinguishes the above mentioned churches, as well as many others unmentioned herein, from the little Episcopal Church in which I was raised and the large Evangelical megachurches across the United States is that the Jerusalem churches were physically and aesthetically pregnant with meaning. The Jerusalem churches dripped with reverence, unmistakably houses of God.

There were no commercially created signs and advertisements for the latest and greatest Bible studies or in house events with trendy seasonal themes. Neither the website for the Church of St. Peter in Gallicantu nor the website for the Basilica of the Agony features names of super star pastors.

The prayers and singing heard inside the Jerusalem churches was a world apart from the charged geopolitical environment outside the churches’ walls. Within, there were no culture wars or political crusades, but instead there was prayer, confession, and songs of praise.

Far and away from what has become of much of American Christianity, the churches in Jerusalem were wholly counter-cultural, reverent houses of the Lord.

Today, many Americans my age and younger are rejecting aesthetically deprived, commercialized Christianity in search of a counter-cultural, deeply-rooted, genuine and reverent tradition of faith. As a sacramental, liturgical tradition, Anglicanism's holistic, tangible, ordered worship and thoroughly non-commercialized spirituality offer a welcome return to early Christianity for which so many yearn.

Therefore, as new parishes are planted across the country, we mustn't allow ourselves to neglect the non-sacramental means - such as the symbolism of colors - through which God communicates, inspires, and uplifts his flock. Let us move forward by fully embracing our aesthetic past. Let us establish abidingly, unquestionably reverent houses for our Lord; that no longer will sanctuaries stand empty, lifeless, and vacuously beige.

O heavenly Father, whose will it is that all should come to you through your Son Jesus Christ, you have filled the world with beauty: Inspire our witness to him, that all may know the power of his forgiveness and the hope of his resurrection; open our eyes to behold your gracious hand in all your works; that, rejoicing in your whole creation, we may learn to serve you with gladness; for the sake of him through whom all things were made, your Son Jesus Christ our Lord. Amen.

(adapted from the Book of Common Prayer)

Posted by Paige on May 19, 2020
Email ThisBlogThis!Share to TwitterShare to FacebookShare to Pinterest
Labels: Aesthetics, Worship